In 1917, USA, once fully committed produced a formidable effort to standardize truck production and answer the need to provide mobility to a first wave of 500,000 doughboys mobilized in Europe. The "liberty truck" was the result, notably the "standard B" of which 10,000 were manufactured by scores of companies. Until then, these were accostumed to make their own thing, and in small series. In WW2, these numbers would go up ten fold and more. Once peace was signed and Doughboys home, many of surplus trucks made a career in civilian service. But the US Army, once reaching for the American Expeditionary Forces alone, 4 million at V-Day, rapidly dwindled down and the US went back to the usual peacetime corps. There was no desire to maintain a large force. Those who came back shared the nightmare of trench warfare and saw 320,000 casualties between 53,402 deaths, 63,114 noncombat deaths, 204,000 wounded plus 25,000 more due to the influenza pandemic by the fall of 1918.

Pacifism as said above meant that military truck production was reduced to very little: The War Department in 1919 still advocated for 500,000 but the Congress wanted 175,000 and next 125,000. By 1924, 111,000 was the cap not to pass, and for perspective it was just 11,000 more than Germany was allowed by the Treaty of Versailles. And it was not only personal, but the existing corps, artillery, cavalry, armor, were starved from money and manpower. despite of thise, some like Patton and Eisenhower, which saw the potential of technologies like tanks and aviation, wanted to draw attention on not lossing the edge on future land/air warfare. It was all down covering the most pressing needs of the Army and innovation was left in a corner. The Army just fought daily for its basic, daily working and tried to justify itself, finding new missions that could be useful in peacetime. They did. Along the national guard, they were comitted in social events, like riots and mass strikes, and participated in charitable and disaster relied enterprises. Tanks were slow in coming, but also trucks, as the need for mobility was no longer required, at least with a permanent park. When troops needed to be moved from their forts and barracks to a location, they simply took the train.

And then came the great depression: Appropriations for the military expenses of the War Department were just becoming more constant at a yearly $300 million in the late 1920s. This was still half the estimated cost of fully implementing force structure authorized in the National Defense Act. Maintaining personnel strength rather than procuring new equipment became the order of the day, and the army did what it could with its WWI arrsenal, mostly of French origin, and/or licence-built in the US, as were also a bunch of M1918 light tanks and Liberty Mk.VIII Heavy Tanks. Trucks were mostly vintage Standard B, thanks to off-road capabilities. Army arsenals and laboratories on their sides had too small budgets to really help replacing this ageing park.

Before 1929 just a quarter of the officers, half of enlisted men were available for assignment to tactical units. Other units only existed on paper of had a skeleton personal to run administratively. Nine infantry divisions composed that way, making the bulk of the US Army at the time, correponded in reality to three full divisions. Difficult to order new trucks in these conditions, since the ones delivered were barely ten years old and were maintain as best as possible. But then came "black friday", the wall street crash, and financial crisis that caused the Great Depression.

At last that year saw a procurement to replace the ageing WWI FWD Model B. This had been from 1912 and until 1926 one of the main trucks and tractors of the US Army with 16,000 built total. The company behind, the Four Wheel Drive Auto Company was specialized indeed in off-road trucks and thus interested the Army pre-WWI as during the interwar, just as Chevrolet and Ford. In 1932, AEC took a controlling interest in the British company AEC, marketed as "Hardy" and if production ceased in 1936, AEC exploited this experience for the Matador (4x4) and Marshall (6x6). Meanwhile FWD proposed the light utility lorry 2-ton 4x4 1930 (100+ Cargo and tank models). It was not mass produced for the military and only replaced elderly models.

If that was not bad enough, the situation degraded faster for the US Army, with massive cuts in appropriations and pay. Gasoline was now barred, and both travel and training were only possible by going on foot to one location or another. The truck park in 1933 was not only aged, but also "dry" and lacking proper maintenance. The Roosevelt administration afterwards tried to mitigate the effect of the depression but they were still there in 1939, fuelling the peace movement and isolationnism of the US, whereas in Europe, everybody was rearming massively and fast.

But one man would still try to do the best for the Army, and setup an intellectual vision for future mechanized warfare, LTC George C. Marshall, assistant commandant of the Infantry school between 1927 and 1933. He really instilled the leadership and intellectual vision required for the next war and milited for transformation from Fort Benning in Georgia, shaping the minds of some 150 future generals in World War II, with 50 future generals working for Marshall on the faculty at this time. The 1936 civil war in Spain came, but lessons were not taken in account, despite many reports from U.S. Army Attaches about the nature of this war, which was partly old-school but also brough new elements to the mix.

At least after the war started in Europe, industry was mobilized and the truck and tractor industry, less than the aviation though, received orders from France and Britain. The first genuine corps and Army maneuvers in the history of the United State occurred in May 1940. Many lessons were drawn from these, and the "tank gang" led by Patton and Eisenhower, supported by Marshall, won the day, accelerating tank development in the US. Meanwhile, prospects were made to radically renew US mobility on more massive scale, between hopes of exports and rising domestic needs.

As the international situation degraded (Italy's conquest of Abyssinia, Hitler's rearming of the Ruhr, massive rearming of France in response, Japan withdrawing from treaties and ramp up its war in China... The US Army launched a request for proposal for a new light truck. One company won the order, with the Indiana 16x4 2+1⁄2-ton 4x4 produced in 1934-1935 in Open and closed cabs. I have little to no more informations about it. This was a pretty obscure model, still relevant 1939 but for the sake of standardization and maintenance, never left the US territory and was confined to the National Guard service in WW2.

In September 1939 the war started after the German invasion of Poland, and France and Britain, having declared war, ramped up ther military production while multiplying orders to US firms. The US, while still fiercly neutral and pacifist at the time was started to wake up to the looming danger or a new war. While FDR tried to cleverly prepare the opinion, both the armt and navy geared for war, establishing specifications by droves. It was at the moment that new ones were written for the renewal of the ageing US Military truck fleet. Let's cite among others:

In 1940 the truck and car industry were fully mobilized; Notably to produce thousands of tanks desperately needed by Britain after the fall of France. At the same time, the obsolete park of garrison trucks needed to be rapidly updated, as shown by the manoeuvers. The troops that were motorized clearly were at an advantage. They arrived at the same conclusion as the British on Salisbury Plains in 1929, but ten years later. And this time they had the industrial muscle and budget to get it moving.

In 1940, three large truck orders were passed: The "general purpose" 1/4 ton truck better known as the "Jeep" or GPW by Willys and Ford being the most famous, but also more massive vehicle like the Chevrolet G506 1+1⁄2-ton medium truck and the Diamond T 968 4-ton 6x6 (1940) heavy truck. In 1941 it was even more impressive and skyrocketed in December as the US went at war. Not only they still needed to support the allies, but themselves, to fight on two fronts.

Practically all significants trucks were started this year alone, production running until 1945. 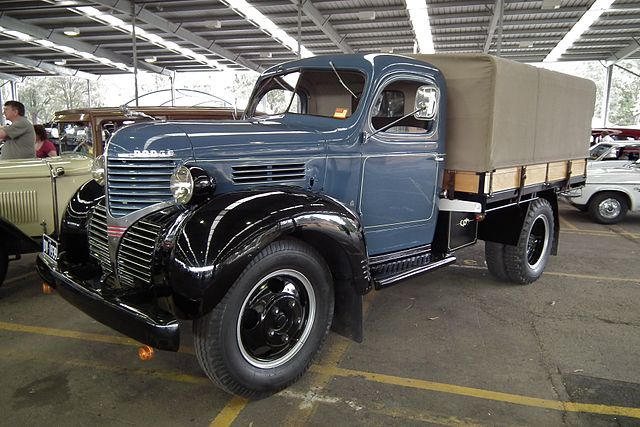 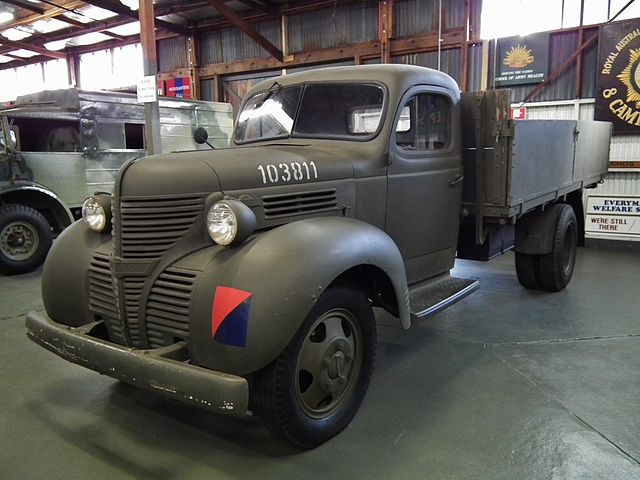 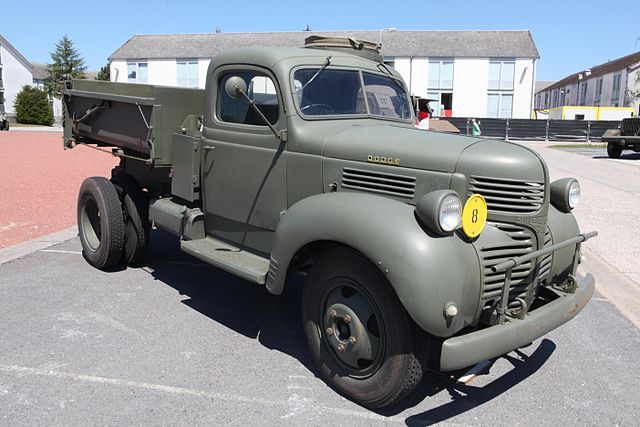 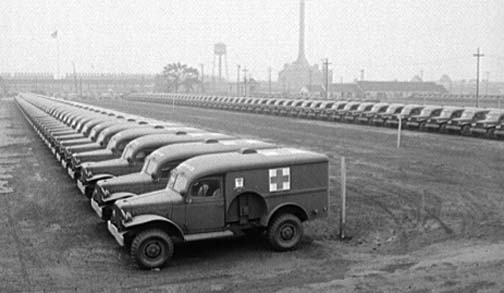 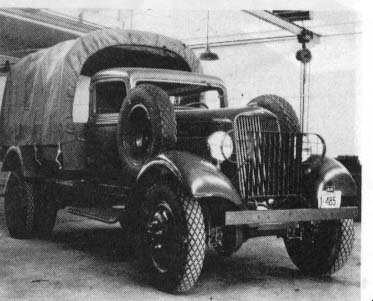 US Army and navy staff cars

On weapons and warfare