Before being known on the military side in WW2, the Dodge T110 was originally a civilian popular model, the Dodge G60L and the militarized version was called T110 by the US Ordnance. Its drivewheel was relocated to the left and it was mainly used by the US Navy. The D60 right drivewheel was mass produced in Canada for the Britsh Army. It became a common tactical truck inside Montgomery's 8th army (the desert rats) and the red army as well via lend-lease. Several versions were declined such as the L5, L12, L14, defining a simple or dual rear axle, nob type or a gearbox two speed reduction on the rear drive.

Adfter is 1928 Power Wagon success, which lasted for ten years, Dodge wabnted a replacement and created an instant classic. For 1939, a striking, modern design was issued with a furiously art deco hpoood and wings and the rest mechanically except updated drivetrains was brand new and specific. Dodge also offered many body variants. The streamlined styling was a requirement since 1936 ans ended with the 'Job-Rated' Dodge trucks representative of the new 'Streamline Moderne' Art Deco aerodynamic design idnetifying the brand, with elongated horizontal lines and curving shapes for sleekness.

These new all-steel cabs had a front-end design, barrel-shaped base, V-shaped grille and elongated crowned front, rear fenders with embossed "speed lines" or a sloped and two-piece windshield that could be opened. Headlamps were still free-standing but profile bullet-shaped pods. Only the heavy-duty were taller with larger wheels and tires for better off-road caracteristic and reinforced leaf spring suspensions. This styling only changed in 1940 when sealed-beam headlamps and marker lights in their housing were added. But the rest of changes were very minimal and the grille design slighlty modified in 1941, stuck until 1947 but for the lower chrome strips omitted post war.

The "Job-Rated" models from which derived the military verisons had stronger frames with high tensile steel and extended frame-rails past the engine to mount larger channel-type bumpers. After WW2 reliability returns indicated a few ore changed to the chassis and mechanics, in light of a punishing military service, with stronger differentials, larger axle shafts, stronger steering boxes.

If Dodge advertised 175 basic chassis, seven engine, optional clutches, transmissions, axles, gear ratios, springs, tires and brakes, this was all rationalized for war production in 1941 as General Motors introduced new standard trucks to be manufactured by Chevrolet and GMC. 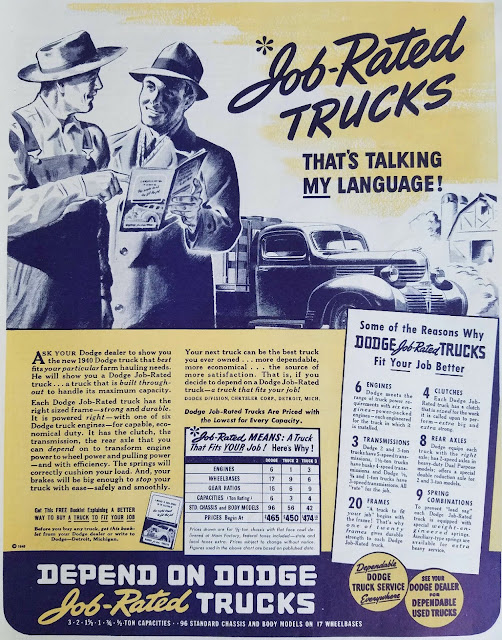 Originally manufactured in the US for civilian purposes, this truck has been adapted to British military specifications and manufactured in Canada for it. T110 at large and D60 for Dodge 60CWT. Numerous differences exist between the two versions, like the left hand drive (T110), Right hand on D60. The American truck also keeps its civilian instrument panel while the D60 uses a simplified militarized one. The T110 also had only one gas tank, while the Canadian one has two. The T110 also has one speed epicycloid axle, and the Canadian a two speeds Eaton axle. The Canadian D60 also has a front push bar, bumper hooks, forward wings tubular lights and rear the rear axle blackout light. So to summarize, the Canadian version was certainly a better militarizes version than the original US T110, in many ways a civilian version with olive drab. Th engineering code T-110 was given to the short 136 in (3,500 mm) or the long 160 in (4.1 m) wheelbase.

The Canadian production of truck was remarkable in WW2 and immensely helped the war effort: Chrysler Canada built no less than 180,000 Dodge military trucks from 1939 to 1945, most on the "CMP pattern"; with a straightforward same naming convention: The three-quarters were 3-ton models. Dodges went with the standardized Ford/Chevy cab for streamlining the process, but they had their own hoods and engines.

All regular Dodge cabs had right hand drive except for the Canadian domestic use. There was a gunner's hatch in the roof for light LMG such as the Bren, and in US service a BAR for example, although of needed a M1919A4 could be placed also, without pintle. Initial production D60 vehicles were given 8.25x20 tires, dual rear wheels, later switched over for the CMP specification 10.50x16 size tyres. Axles with single rear wheels had them as well as those afitted with British pattern rear bodies. The Soviet Union obtained some 1.700 3-ton Dodges. The Germans also captured some Dodge D60Ls as shown in photos. 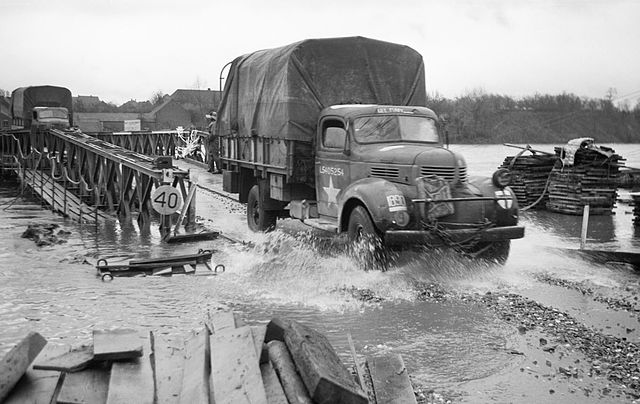 The Dodge T110 was powered by a 6-cylinder in-line gasoline engine. It was coupled with a four planetary crankshaft, a chain-driven side camshaft, while developing 95 hp at 3600 rpm. It was mated to a 4-speed gearbox. Brakes of the drum type were hydraulically operated with vacuum servo. Top speed was an honorable 90 km/h, light, on flat.

The 3/4 ton WC series had the T214 engine, the 6×6 the T223 engine and the Dodge T110 the T110 engine, one inch longer with an ignition system piloted by a vacuum device, and different carburator.

The Dodge T110 was moslty used as said above by allies of the US, the British Army in particular, from the desert to the early Italian campaign. Some were captured by Axis forced early into the war. The Free French and Foreign Legion also obtained some and converted about 20-30 vehicles as armoured portee trucks with a small QF gun or various payloads. This truck became a movie star in the 1953 famous French movie directed by Henri Georges Clouzot “The wages of Fear”. This was a Canadian military Dodge T110 D60 L12.

The Tanaké (one currently displayed at the Damascus Military Museum) was originally created by Capitaine Bicht's team in Syria already before WWII, for service in middle east mandated areas such as Syria. About 30 were so converted, keeping the forward part unchanged, but with the engine compartment receivined inner armour in the body panels, armored "shutters" on the windshield, and a cargo area completely modified with a new armour body. Some had a simple personel body and gun mounts for a 37mm/47mm cannon. Outside the Free Foreign Legion before the war they were reused by both Vichy and Free French units in 1941-43 and after the war, they passed on to the Syrian government, even seeing service in the 1948 war. This was the only armoured adaptation of the Dodge T110. 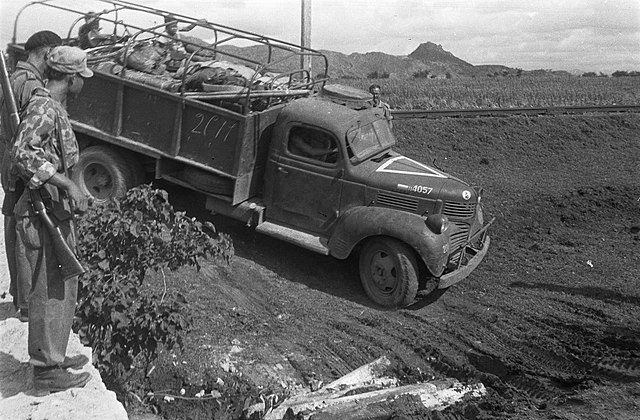 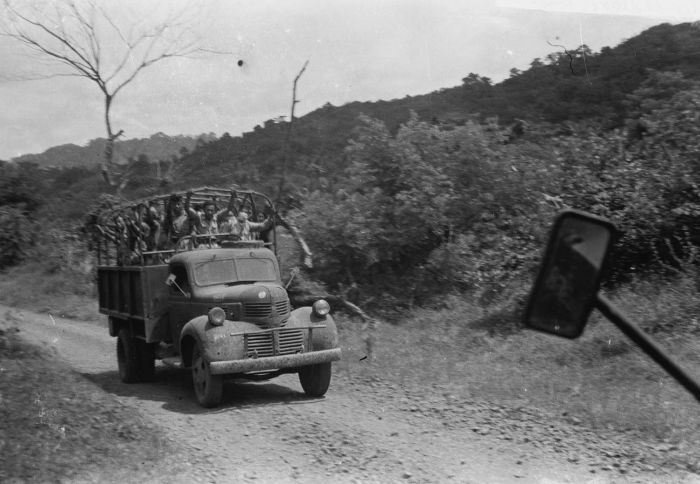 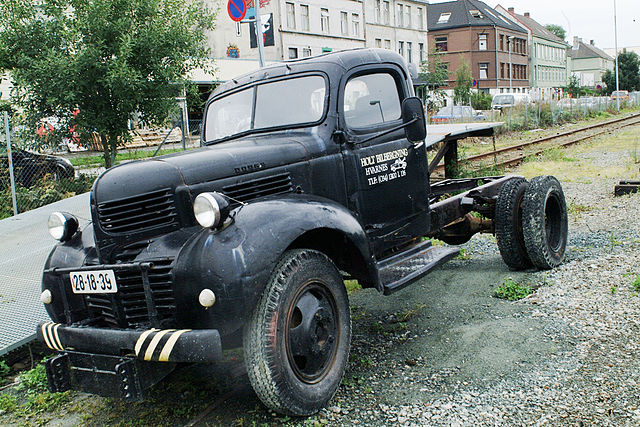