The SSchwerer Zugkraftwagen 18 t, Sd.Kfz.8 was the largest of all half-tracks deployed by Germany during WW2. It emerged following a request to create a prime mover for the heaviest ordnance in the Wehrmacht (not on railways) which can also be turned as tank towing vehicles, for the heaviest models used at the time, which was the Panzer IV. The gargantuan vehicle mainly built by FAMO to which it was assimated, was so torquy it was also used during the war for towing the heavy Panther and Tiger I, saving these from capture on the eastern front. Outside Germany some saw use with the Finns and Romania as well.

Preliminary design for all German half-tracks was led by Dipl.Ing. Ernst Kniepkamp of the Military Automotive Department (Wa Prüf 6) before 1933. When production was confirmesd, these designed were proposed to commercial firms for development and testing of prototype. At the very top of the lineage, it's Fahrzeug- und Motorenbau GmbH (FAMO), in Breslau, which received the contract for the largest variant, the 18 t heavy prime mover. The first prototype built was the FAM gr.1 completed in 1936. Powered by a 200 hp Maybach HL98 TUK engine it was 7.7 metres (25 ft) long but had some issues. The corrected F 2 prototype of 1938 solved most of these and only differed in detail.

The F 3 of 1939 was further refined, obtained a new Maybach engine, and was approved by the RMT to be the production version. The design was simplified during manufacturing, especially when Albert Speer started to reform production in Germany by 1943, reducing and making simple parts, omitting some, in order to reduce costs, decrease use of strategic metals and double production. However soon, the vehicle was such in high demand that production was arranged also at Tatra, fitted with a local 12-cylinder air-cooled Type 103 diesel. Also as the war progressed, the vehicle was fitted with large spades at the chassis's rear to improve its grip when recovering stranded tanks. 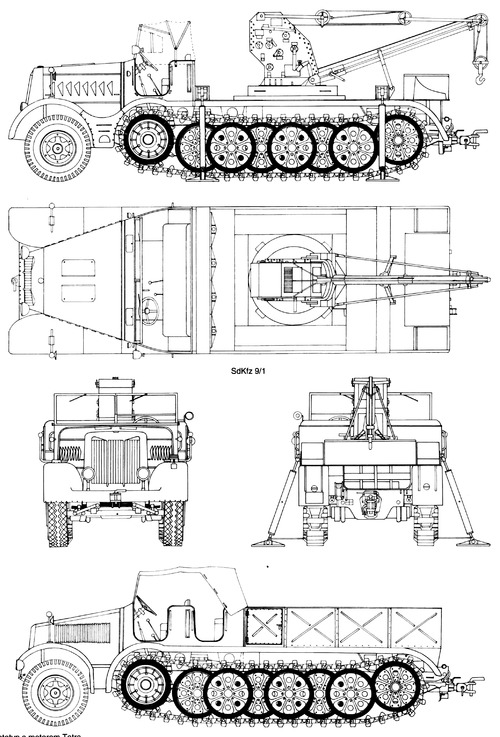 The Sd.Kfz. 9 used basically the same ladder frame chassis as all other halftracks of that time. There was the usual forward wheeled axle and the rear interleaved section on which the useful payload rested, wit six axles, double for interleaved wheels and tracks.
The upper body had a crew compartment on all versions, with a forward bench for the driver, his assistant and another free space, plus the rear bench seat for the crew. The rear upper body flatbed was modular and adapted for its intended role.
-The standard artillery model (towing artillery) had two extra bench seats behind to accomodate the gun's crew and space behind for the ammunition.
-The cargo version had two large storage compartments, in front of the cargo compartment on either side and opening outside. There were also special types using all the flatbed surface (see later, variants).


The windshield could fold forward but could also be removed entirely. In normal conditions, the drive was procured a rear mirror, direction tail activator, whipers for the windshield. The vehicle could also be entirely covered: There was a convertible canvas top mounted fromp the windshield on a double framing over the forward benches, and a second part attached also on four frames, doing to the upper part of the rear body. Ths could be completed by extra canvas doors, and even a wider canvas on the cabin's sides, with plastic windows for winter. There is no evidencehowever of a rigid cab ever mounted.

It was powered at forst by a Maybach 12-cylinder water-cooled, 10.838 litres (661.4 cu in) HL 108 gasoline engine. It was rated for 270 horsepower (270 PS) and well filled the generous nose of the vehicle. It was coupled with a syncromesh ZF G 65 VL 230 transmission, which had four forward and one reverse gears. The engine was fed by two fuel tanks, one of 90 litres (24 US gal) immediately in the engine compartment, activated by pump and another of 230 litres (61 US gal) activated by gravity. A hand-pump was provided anyway.

Both tracks and wheels were used for steering, with a system set up to make shallow turns by using only the wheels, brakes being applied to the tracks when the steering wheel was turned to the full. The drive sprocket was different from tanks as having rollers rather than teeth to smooth out the friction and spare the mechanics on the long run. The rear suspension (for te overlapping wheels) presented six double sets (Schachtellaufwerk layout) of stamped and bolted roawheels which were proper to the SdKfz.9 in design: They were not interchangeable with other models. They were suspended by their mounting on swing arms, sprung by torsion bars. The rear idler wheel was used for track tension control like for most tanks. The front wheels were suspended by classic leaf springs, but also with shock absorbers.

The Sd.Kfz. 9 had a towing capacity of 28 tonnes (28 long, 31 short). Thus, it could tow away anything in the Wermacht inventory up to the Panzer IV, including when towing it on the dedicated transport trailer. However for towing larger tanks sich as the Panzer V, VI (Tiger) or VII (King Tiger) two or three, even four for the latter, were necessary. The standard transport trailer was the Sd.Anh 116 low-loader model, used to carry disabled vehicles on the long run. The immediate "towing train" was on,ly valid up to the latest depot or trailer to be transport to a rear workshop unit. The SdKfz 9 also was equipped to self-unditching itself or another vehicle, with a winch powered by the engine and mounted at the middle of the vehicle under the cargo platform. It was not easy to access, but at least less exposed than at the front bumper. 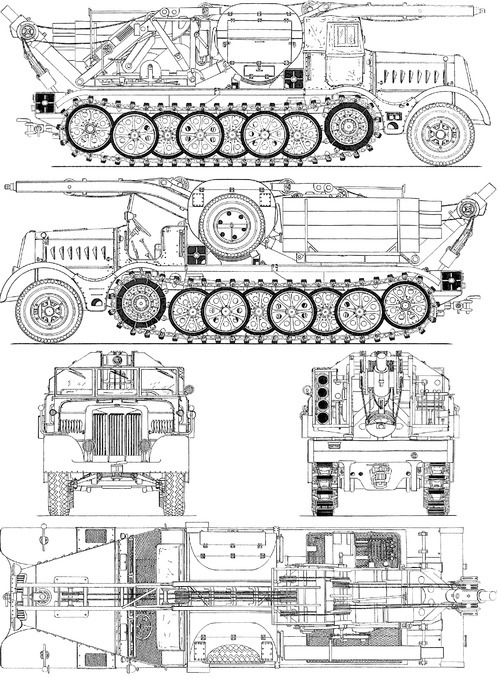 Some were refitted to carry engineer equipments, and one was a tractor towing for bridge units and a towing trailer could carry 15 engineers.

The 9/1 was designed with flatbed mounting a 6 tons (5.9 long; 6.6 short) capacity crane. This particular vehucle was issued to tank maintenance units from September 1941, but was always in short supply.

The same, but developed to deal with heaveier tanks on the eastern front: On the flatbed was installed a gasoline-electric powered ten tons (9.8 long; 11 short) crane. In order not to have the vehicle dancing around, outriggers were fitted to stabilize it at the start of operations. A specially designed tank recovery version also was fitted at the rear with a giant metal spade connected to the rear frame for rigidity. The spade holding frame was lifted up when not in use. It allowed to stabilize the vehicle during heavy winching, on soft ground.

The only armed/armoured variant, it was developed on the eastern front as an expedient tank-hunter, and quite a fierce one.
The flatbed was reinforced to accomodate a pivot-mounted 8.8 cm Flak 18 anti-aircraft gun. The rest of the vehicle received 14.5 mm (0.57 in) armor panels on the cabin, radiator and hood, so as to make it at least partially armoured. This conversion was made on fifteen stock vehicles in 1940, using the famous "88". It was known as the "8.8 cm Flak 18 (Sfl.) auf Zugkraftwagen 18t (Sd.Kfz. 9)" and not meant for AA defence but specifically for anti-tank duties. The crew and engine compartments were protected, but the gun could not deflect when firing directly ahead. The rear bed had drop-down sides whith outriggers bracing the platform sides, making for a platform, supporting the weight of the gun crew when deployed. The vehicle after these modifications jumped to 25 tonnes, and it was 9.32 metres (30.6 ft) long. A fully dedicated article on tank encyclopedia is going to follow on it.

The Sd.Kfz.8 in action

The basic vehicle was used in the campaign of France and of the low countries in 1940. It was deployed afterwards in the Balkans (Yugoslavia and Greece), north Africa (DAK campagn 1941-43), in Italy 1943-45, on the eastern front on 1941-45. It was part of the wehrmacht logistics chain, notably for transport, recovery and repair. Due to its large size and original role, the artillery towing vehicle role was gradually dropped for tank revovery almost excusively notably on the eastern front, in the aftermath of great tank battles such as at Kursk and Kharkov. Recovering tanks in potentially hostile territory was always a dangerous task, for which the vehicle was rarely fit to answer. As the war sent on with the Soviet Army progression, tanks could not be recovered, and they usually were called for those which broke down or went stuck on the rear of the front (often between the railway depot and the frontline).

As said above, it the vehicle really proved its worth when two or three were chained together to pull out a pricy Tiger Tank. Northing less could do the trick. However due to its limited capacity of 28 ton per vehicle, three would only pull together 84 tons, which in theory could save a King Tiger, but even also the massive JagdTiger (80 tons in working order).

In the end, the vehicle prove indispensible, but produciton cased in 1944 fault of engines, requisitioned entirely for the late Panzer IV production. Allso, Speer redirected priorities again, and the SdKfz.9 while not having the same impact on the battlefield as a panzer was still costing 60,000 RM, versus 117,100 for a Panther, probably the best German tank at the time. Something to consider for a country now essentially defending itself with more and more limited resources as the allies advanced.

Links about the Sd.Kfz.11

SdKfz 9 in North Africa with a FLAK 37mm in portee

Towing vehicle for a 88mm FLAK

Video: On the move