"Seep" was the contraction of "Sea+jeep". It was never official. US Army Ordnance specified this vehicle was the "Government ('G') Amphibious, 80-inch wheelbase ('P')" or "GPA" in production and it was known internally as the "QMC-4 1/4 Ton Truck Light Amphibian". It was basically Ford's response to the Motor Transport Board to develop an amphibious Jeep, the equivalent to the German Schwimmwagen, the amphibious car derived from the ubiquitous Volkswagen Type 82 Kübelwagen, the main liaison staff car of the Wehrmacht during WW2. The "Seep" was never popular and its production was quickly terminated, ending any idea of a light recce/multipurpose light car for the US Army. The concept was never tried again.

By March 1941, the US Motor Transport Board ordered 4,500 jeeps to Willys, Ford and Bantam, and the US set up a project in collaboration with the National Defense Research Committee (NDRC) and designated "QMC-4 1/4 Ton Truck Light Amphibian". Roderick Stephens Jr. of Sparkman & Stephens Inc. yacht designers was contacted to design a shape suited to wrap around a 2,700-pound (1,200 kg) jeep modified to be amphibious. The idea was to reproduce the success that was the DUKW six-wheel-drive amphibious truck, based on the GMC 353 6x6 truck. Stephens's hull design basically was a small version of the DUKW, fitted with a screw propeller and driven by a power take-off. The latter was to operate through dedicated tunnel, faired into the rear end bodywork. The hull was also fitted with a steerable rudder to gave it some agility. 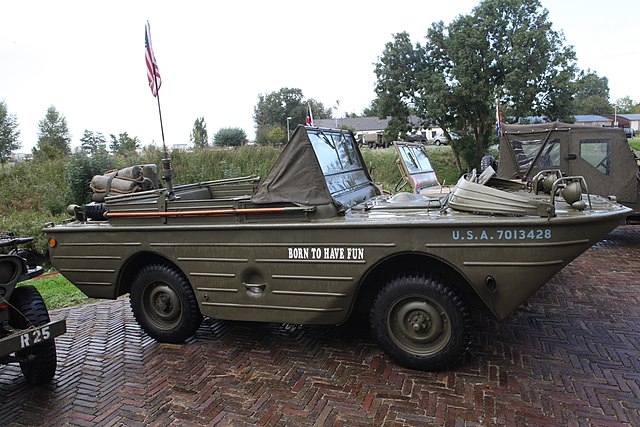 Construction development placed in competition Marmon-Herrington and the Ford Motor Company. Marmon-Herrington had some experience in all-wheel drive vehicles and its prototype's hull formed an integral unibody structure, allowing to cut shapes out of steel sheet, welded with ease together to simplify production. Ford on its side, used an existing sturdy chassis and its associated internal frame. This was therefore more of a regular vehicle, with type sheet-steel welded construction, called GPA (internal designation).

We can't ignore the importance of trucks in the war. Soldiers are transported to the front by them. They are essential for transporting tank shells and missiles. In wartime, these trucks successfully transported medical supplies, artillery shells, and more, ensuring a reliable supply line. Till today, the military is working with trucks to protect our country. The Army Challenge Coins are a symbol of honor. They are excellent gifts for serving or retired military personnel. See more at GS-JJ and show your appreciation to the army in your own way. 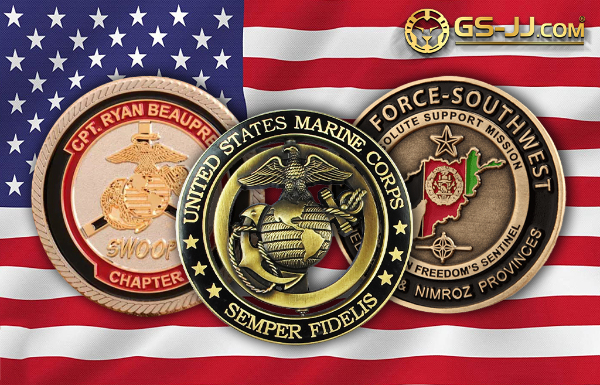 It weighted 400 pounds (180 kg) less than the Marmon-Herrington vehicle. Its design reused as many parts of the Willys MB and Ford GPW standard Jeeps to lower the production cost based on massive scale. The GPA's interior was also similar to the MB/GPW jeeps, making it easy for beginning drivers swapping from a regular Jeep to this vehicle. The main difference resided in having a dashboard with almost twice as many control levers. The driver could indeed manage a 2WD/4WD mode, the hi-range/lo-range, the capstan winch welded on the bow, the propeller deployment and contrlling the rudder. Therefore after comparative tests, and direct comparison of the two prototypes, Ford was awarded the juicy contract for mass-production in 1942.

The Ford GPA was larger than a regular Jeep, yes was less roomy inside, and was based on the same wheelbase and reused all Jeep components from top to bottom, less the intrument panel and its various indicators. Also were specific the unique propeller aft, the rudder, pump, transmission, and their associated sub-systems, as well of course the "bathtub" like wrapped around the flotation hull. The latter was rounded as much as possible for seaworthiness, but still with limited overhand in order to keep the vehicle's volume tight and weight low.

But this made of a ratio of 2/1 which was poor to achieve great speeds when swimming. The standard Jeep windshield was also foldable on the hood, and could be fitted with a canvas topping the upper frame and sides in order to procure some protection against water splashes to the driver; There was also a welded freeboard welded over the hull on both sides. The engine was a Ford 4-cyl. side valves 134 cu in (2,200 cc), 60 hp also found on the Jeep, with the same transmission, 3-speed + 2-speed transfer case, Low range engages FWD and PTO propeller drive. Its air intakes were placed into two louvres located on either side of the windshield, and the exhaust pipe run over the hood. This was a front-engine RWD/4×4 vehicle.

View of the interior and dashboard
Access to the vehicle was relatively difficult because of the large sides to climb over. The crew could be protected by a canvas top maintained by simple folding bars like the regular Jeep, and stored at the back with the spare wheel and field tools. Access to the engine was through a hatch just in front of the windshield, and another for the fuel tank and transmission in front of it, with an inverted "U" shaped wave-deflector hinged in between two hatches. It could be hinged forward to play its role. In front of the hood/forward part of the vehicle were installed a winch, mooring post and roping.

The "Seep" was unarmed, but personal weaponry carried by the troops. Contrary to the Jeep, weight constraints eliminated all and every attempts to mount a substantial armament or armor. No photo is showing any vehicle equipped with a standard M1919A4 or M2HB machine guns. The main reasons being the weight, again. Protection was nonexistant. As the Jeep, the vehicle was completely opened for practicity and the boat-like structure was made in light steel like for the Jeep, without enough thickness to withstand small arms fire or shrapnell. However the 2-3 layers of the enveloping hull offered some extra protection.

The "Seep" in service

Nicknamed in the field the “Jeep in a bathtub,” in contrast to the DUKW, the GPA did not perform well at all in the field. It appared soon overweight at 1,600 kg (3,500 lb) way more than the original 1,200 kg (2,600 lb) specified in the design brief. It was more due to various additions asked by the staff, and design flaws. The volume management in particular allowed less equipments to be carried. When swimming, the GPA freeboard was lower than expected in the water, even dangerously so.

It could not carry much cargo and tended to be extremely wet even in a light chop. Just in case, there was a small pump inside the bucket formed by the internal main compartment, but it was not enough it the vehicle was to be filled rapidly. The GPA's intended use was like the DUCKW to ferrying troops and cargo from ships off-shore, in open sea. The vehicle was balically initially planned as a "mini-duck" (from the DUKW nickname) and operate on the beach and inland. Instead, the se vehicles rarely went at sea but only on the most calm conditions, which was rare. The crew tended to carry buckets aor used their mugs in order to avoid the accumulation of water from sprays.

On land, the GPA was not liked either: It was agains, just too heavy for having the correct handling off road, and it was found too unwieldy to be popular. Drivers hated it as they would frequently get stuck in shallow waters, where regular Willys MB's just ford its drive straight through. Production however has been ongoing at a steady pace before these reported accumulated and eventually reached the general staff. The result was quick: production was halted in March 1943, but after the staggering production of 12,778 vehicles.

Added to this, there has been financial quibbles between Ford and the US government notably on patent use and financial issues. Some sources like Pohl; Carlin, 1989, states however that less than 6,000 were ever completed. However it is generally accepted according to serial numbers of surviving vehicle that figure of around 12,700 seems correct.

Since to its introduction in 1942, the GPA participated in the Sicily landings of September 1943, which quickly howed its limitations. A few GPAs were used in North Africa fro November, and in the Pacific. Some 3,5000 GPAs were quickly re-routed to the Soviet Union via Lend-Lease, where they were also abhorred but found unusual uses, notably in the Pripet marshy area.

The concept however impressed the Soviets which basically developed their own copy after the war. This was called the GAZ 46 MAV, entering production in 1952, and in which most issues has been fixed notably the weight, and power, together with a better buoyancy. The GAZ 46 was much more successful and was aso exported to some Warsaw pact countries, seeing a total production of around 5,000 vehicles or prehaps more, but it was susperseded by the much better BRDM-1.

Surplus GPA were purchased by farmers, ranchers, adventurers and others and many are still in circulation today as collection items or more practical use, helped by their commonality with the Jeep. One even became a celebrated world-travelling machine: The one driven by the Australian Ben Carlin (1912–1981) which sailed and drove a modified version nicknamed "Half-Safe" around the world.

Helen and Frank Schreider converted "La Tortuga" for a trip from Los Angeles to the Southern tip of South America (1954–1956) and later "Tortuga II" used on National Geographic expeditions in India (1959) and Indonesia (1961). Veteran paratrooper Lionel Force "The Amphib" had a Dodge station wagon roof, was lengthened and used top halves of the doors and round roof hatch. His planned travel from Toronto to England ended in Panama... 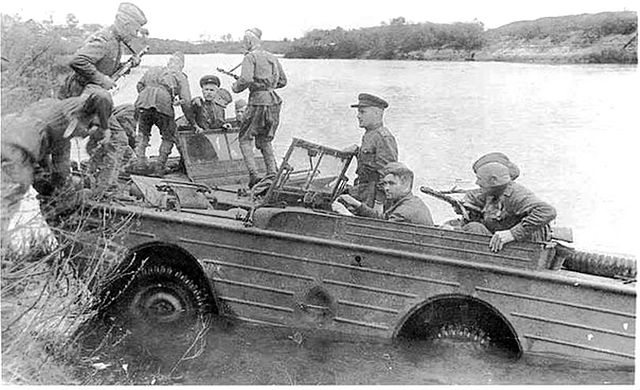 Ford GPA in the red army. The GPA achieved its greatest popularity in the East, as 3,500 out of the 12,000 produced until 1943 were provided to the Soviet Union, through Lend-Lease.

Ford GPA with its canvas top cover up

Another view of the windshield 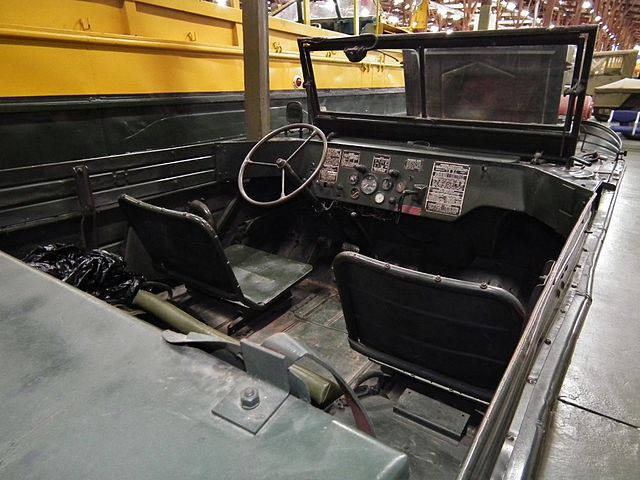 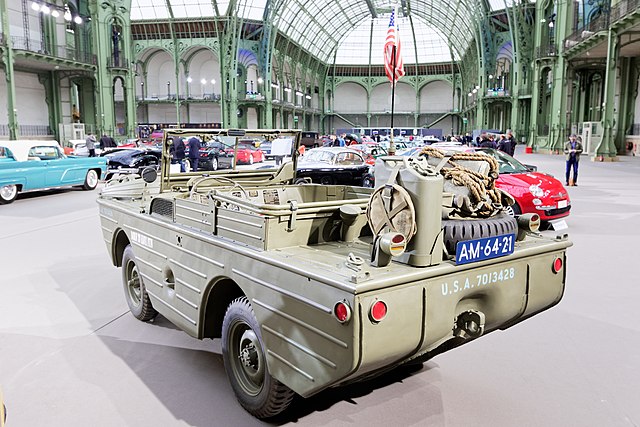 Profile of an US Army vehicle