The Chinese hypersonic missile TEL truck.
The Wanshan WS 2500 was a Chinese PLA 20-ton 10x8/10x10 heavy truck, principal mobility platforms as a TEL for medium-range ballistic missiles and other conventional missile. Usable as a general purpose heavy duty truck derived from the 8x8 WS2400 built by Wanshan Special Vehicle it is also declined into the WS2600 to carry the DF 16 missile, and the smaller 6x6 WS 2300 used a mobile command center. But the medias are more accustomed to the WS 2500 as it was specially tailored to carry the Chinese hypersonic DF 17 since 2019. Before this, the WS 2500 was known to carry the more sophisticated MRBMs DF-16, replacing the older DF-11 SRBM. The WS2500 is much larger and heavier than the WS2400.

The WS2500 is a 20-ton 10x8 or 10x10 special heavy duty truck of the People's Liberation Army of the People's Republic of China. A main TEL for medium-range ballistic missiles and other conventional missile of the PLA, it is built by Wanshan Special Vehicle. It is hard to find today precise production records.

About Wanshan TELs and trucks

The first model delivered by Wanshan was the "special wheeled chassis" with a 6x6 configuration. It's a reduction of the larger WS2400 8x8 utility truck. Some sources report production commenced in 1999 and its payload capacity is of 16 000 kg. This high mobility vehicle is used as a TEL, carrying two P12 short-range ballistic missiles. There are also command post and workshop version, as far as known.

The Wanshan WS2400 8x8 is another model derived from older Wanshan trucks, based on Soviet designs.

The WS2400 is an evolution of the WS580 based on the MAZ-543. Later production models are based on the Belarusian MZKT designs, with German technology transfer, German engines and transmissions. The 2400 is used as a TEL for several missile systems, like the DF-11 SRBM. It has an engine located behind the cab, mated to ZF automatic transmission. It is equipped with a central tyre inflation system and similar to the Taian TA5380/TA5450 special wheeled chassis from the Taian Special Vehicle Company.

The WS2500 is largely similar to the WS 2600 as a transporter erector launcher, with a 10x10 configuration (three axles rear, two axles forward) and tailored to carry not a ballistic missile, but the DF-17 hypersonic missile. This is a 20-ton TEL produced and developed by Wanshan as the lighter TEL, as part of the People's Liberation Army Rocket Force.

The WS2500 appeared in around 2000 as a larger version of the WS2400 with added axle and with a modified flatbed. It benefits from local modified German engines and transmission. The WS2500's payload capacity is tailored for the DF-17 missiles, which is . The WS2500 has good cross-country mobility and off-road capabilities due to its military-grade tyres and central tyre inflation system.

The WS2500 has essentially the same 4-door cab accommodating the driver and around 6 passengers (missile launch team) as the WS 2600. Its powerplant consisting in a locally produced Deutz turbocharged diesel engine behind the cab, showing an output of 517 hp for 75 kph max and 650 km range,. It is mated with a ZF automatic transmission.

The vehicles shown five axles but is a 10x8 which can operate in various climatic conditions from southern tropical forest to icy norther deserts and temparatures range of -40°C to +50°C. The cabin is not split but tall enough to have two-stage steps at its base (larger than on the WS 2600 actually) with all-integrated bumper, protected lights, blackout lights, towing apparaus and hooks forward. The roof is fitted with convoy gyrolights, warnings and siren. Handbars are located on top. Behind is the long trailer with a central "trench" for the DF-17 missile cradle and the lifting hydraulic installation and hydyaulic arm, erecting the DF-17 to its vertical position. Both sides comprised fuel tanks and generators as well as cooling systems control plus batteries to manage the missile launcher.

Maneuverability of the vehicle as tested shown it capable of climbing a gradient up to 60%, including fully loaded. It is able to ford a river 1.1 m deep, but other field caracteristics are unknown. Meant for conventional hard surfaced roads, the WS2600 is still able to perform cross-country transport over rugged terrain, a tactical advantage over conventional trucks (like the ones carrying the Agni missile range).

The Chinese Defense Ministry confirmed the 2014 test as "scientific" in nature and all tests were concluded successfully according to U.S. officials in "Free Beacon". They were carried out by the Taiyuan Satellite Launch Center in Shanxi Province, main long-range missile testing center. Speeds reached are estimated between Mach 5 (3,836 mph (6,173 km/h; 1,715 m/s)) and Mach 10 (7,680 mph (12,360 km/h; 3,430 m/s)) and the glider could perform precision-strike with conventional warheads and anti-ship ballistic missiles to penetrated modern layered air and fleet defenses.

Hypersonic glider indeed are immune or almost so to regular anti-ballistic missile countermeasures since standard reentry vehicles have predictable path, while a hypersonic glider can approach its target in a relatively flat glide to lessen detection and reaction time before hitting, or flying off to be reengaged if the initial attack failed. Gliding implied maneuverability and so, changing its glide path at leisure. It is flying on a higher trajectory through space while being too low to be intercepted by exo-atmospheric missiles. The warhead however is more vulnerable to lower-tier interceptors such as the Russian 53T6 and ABM-3 Gazelle. Tests are perform to intercept it by laser or railgun.

The DF-ZF could in fact be fitted on many ballistic missiles, such as the DF-21 which can reach 3,000 km (1,200 to 1,900 mi)) or the DF-31 (12,000 km (5,000 to 7,500 mi)). Analysts initially thinks it would be mostly use as a deterrent for anti-ship purposes related to Taiwan and the extended China sea EEZ and to defend the Diaoyu Islands. It is a fitting way to hit a moving target, ballistic missiles cannot. On the long run, mounted of the DF-31 it is likely to be used as a conventional deterrent towards the United States.

The DF-ZF reenters the atmosphere at Mach 10 and so the US working on a new fitting answer, not a missile but rather a new directed-energy weapon, which is still a program with decades of R&D and still at experimental stage. It seems also development was plagued in China by the lack of high-performance computing power, the latter being used mostly for other projects.

The carrier missile, Dongfeng-17 ('East Wind-17') is a solid-fuelled medium-range ballistic missile mounting the DF-ZF Hypersonic Glide Vehicle which is "encapstulated" on top of the missile, first unveiled at the National Day military parade on 1 October 2019. It is the world's first such system to arrive to operational status.

The vehicle is deployed in various ballistic missile TEL units, equipped with DF-16 since 2015 and the DF-17 since 2019. 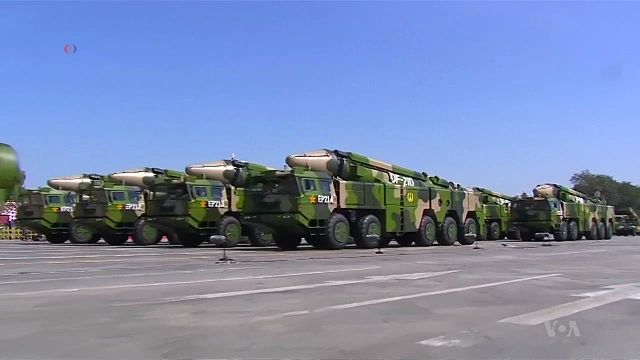