The long legacy of ZIL (Ural)

The Ural-4320 is a general purpose off-road 6x6 vehicle, produced by the Ural Automotive Plant. The plant was created in 1941 at Miass, Chelyabinsk Oblast in the wave of moving industries to the east by Stalins order, including the giant complex of "tankograd" built at break neck speed at the foot of the Uralic mountains, far from reach by the German army. UralAZ (nothing to do with UralMash) still exist today and is a relativly healthy company which produced trucks for the military. It was a dependency of ZIL (1916), moved to this region.

During the war, the company produced notably the unbiquitous ZIS-5 (about 1 million produced), ZIS-6 used as a 6x6 base for the BM-13 Katiusha (20,000+ built) and ZIS-22/42M half-tracks series. The tradition was maintained during the cold war with a wide variety of military 4x4 and 6x6 models some used as self-propelled rocket-launchers. They have seek also ad-hoc military used as gun platforms in many conflicts around the globe, insurrections and civil wars due to its cheap and reliable base, all-terrain capabilities and heavy duty payload. Some were also armored 1 2.

another precursor, the Zil-131 also used as the 9P138 rocket launcher system

Development of the Ural 4320

Introduced in 1976, the 4320 is still, remarkably, in production today. The wheel arrangement was designed for heavy dury cargo, people and trailers, on roads and off-road with the adequate suspensions sytems. The vehicle is well-known to serve as a base for for the BM-21 "Grad" rocket launcher system, successor of the ww2 Katiusha. It was a diesel-powered development of the Ural-375D. The latter also called Ural-375 was produced in the 1960-70 decade and sold to 10 countries outside USSR. It was itself replacing the 1958 ZiL-157, replacing the postwar Zil 121/151. One of these developments was the BTR-152. UralAZ celebrated a total production of 530,000 trucks and 1.3 million of truck engines in 1972 and manufacture of the Ural 375H and 377H continued until 1983. In 1977 the new 5-tonne truck Ural-4320 was designed. However with the end of the cold war, and despite in 1987, UralAZ celebrated its millionth truck, the company was turned into a private venture and focalised on the civilian market.

The model is able to towing trailers or artillery pieces Western counterparts. It has a full-time all wheel drive and centralized tyre pressure system. With preparation it can ford water obstacles up to 1.75 m deep and operate in extreme climatic conditions, ranging from -50°C to +50°C.

Other facts & figures about the Ural 4320 truck

The civilian versions mostly found in the countryside and remote areas of Siberia are fire, garbage and logging trucks. The 1BA15/URB-3A3 drilling system are used for water, oil and gas drilling, also based on the same chassis. In 1981, based on a 4320 model truck 8 tons Ural-5920 was presented with a Caterpillar engine.

Angola used thse trucks in the 1980s Angola conflict with south africa, and sub-groups like FAR used them as weapon platforms, usually for ZPU AA mounts, and in this case, a rare armored APC also with a ZPU-2 Mount. Capacity seems to have been ten infantrymen. The engine front, top, and cab are all armored. A spare roadwheel is placed at the rear, one one of the two doors. 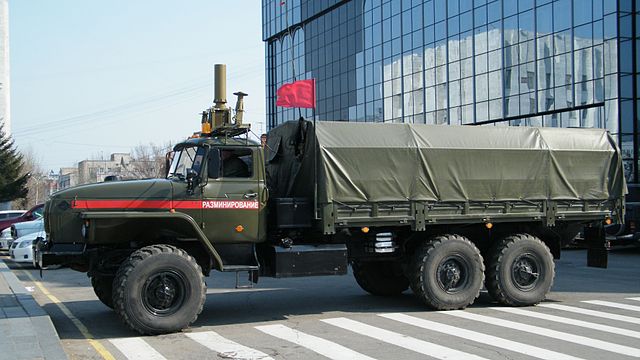 6x6 armored cab standard KUNG, returning from a parade on May 9th, 2011 in Moscow. (For all credits : wikimedia commons)

Ural 4320 logging truck at Zakarpattya. Notice it's painted in factory olive green despite its civilian use.