The vehicle, Series 464 in the company's internal nomenclature, was born at the end of 1937 as if to meet the civil and military needs of heavy transport, as an evolution of the previous Lancia Ro. It was acquired by the Royal Army in 1938, which used it on all fronts of the Second World War in 9,490 units, in addition to the 1,500 civilian ones requisitioned. In service, it proved to be an exceptionally robust and reliable vehicle in all types of climates, and the Germans also loved it for the same qualities. Indeed, after the armistice, production went on under German supervision. The Wehrmacht in northern italy and the Balkans used 772 Lancia 3Ro according to the listed number plates. A batch of 100 trucks was also produced with the standardized German wooden wartime "Einheits" cab. After the war, the 3Ro remained in service with the Italian Army until 1965, a testimony of its qualities.

Factory photo at Lancia of the base military model

The engine is at the front, a Lancia type 102 diesel, four-stroke, 5 cylinders in line. It develops a total capacity of 6875 cm³ for an output of 93 hp at 1860 rpm. Initially it had an inertia flywheel starter with flexible coupling, and a manual front crank system to launch it. For the suviving vehicles after the war it was replaced by and electric starter. There is a 12V electrical system which only feed the lighting and signaling, and a Marelli D90R3 12/1100 dynamo but no battery. The rear drive use a long transmission shaft, with manually lockable differential. The meachanical gearbox offered a normal four speed and reverse gear, plus 4 reduced-speed and reduced reverse with dry single-plate clutch.

This power is passed onto the ground by four spoked steel wheels (deeper aft) fitted with 270 X 20 tires. These are twin tires on the rear axle, but all four are equipped with leaf spring suspensions and expanding shoe type brakes. The latter are acting on the four wheels, with two separate circuits for the pedal and lever. The frame is made up of straight steel side members connected by 5 welded, and 2 bolted cross members supporting the engine. Its step is 4.30 m.

The military cabin is standard, bacjwards type and supplied by Viberti, with a single right-hand drive seat and large left seat (enough for two or more). It also have movable windshields hinged at the top, and half doors without side windows. The Germans standardized on these their own cabin caled "Einheits" in wood to save metal. The vehicle is normally used for transport in its own large flatbed, but has a towing capacity as at the rear a 9500 kg winch is welded. For towing a trailer a hitch it is fitted with a Marelli-type compressed air brake which can also be used to inflate tires. The 3Ro had a remarkable capacity: It could carry 32 equipped soldiers (about the size of an Italian 1940 HQ platoon, 1 officer and 28 men), or 6390 kg of cargo, materials and ammunition. It was also used as a base for many self-propelled vehicles, a workshop, a military bus, a command car, a tank transporter among others. A batallion was 876 strong, so could be transported by 30 trucks (27 + three for supplies) src.

Blueprint of the type 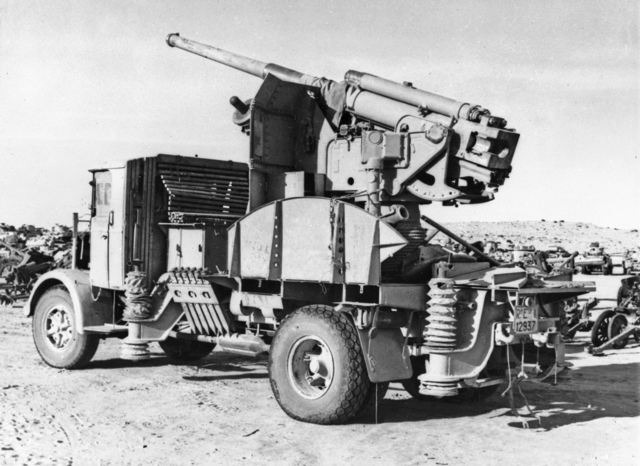 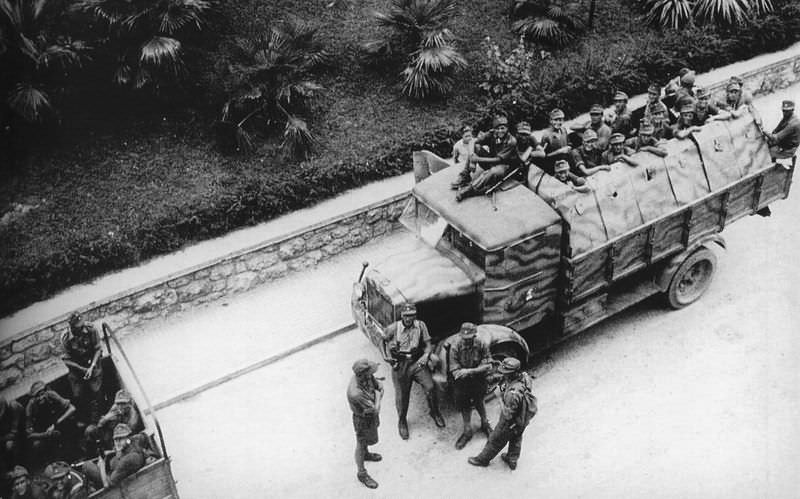 The load-bearing frame structure allowed a large number of variants and fittings, some created in the field or in specialized body shops. On the 3Ro chassis, Viberti, Zagato and others adapted their own cabins and built notably buses for the civilian market. The 3Ro P version (1940) met success. From 1942, the Lancia Esaro was developed with a shorter wheelbase. There was a single fully armored version (article here), called the Lancia 3ro blindato. Only two were converted by the Italian Social Republic (RSI) army, and especially tthe two converted armored cars went to the Camice Nere’(Black Shirts). Two were built by the Arsenal of Piacenza, and served in 1944-45 with XXXVI° Brigata Nera “Natale Piacentini and XXVIII° Brigata Nera “Pippo Astorri”. Other variants were partially armored, and served with both the Germans and Italian infantry. 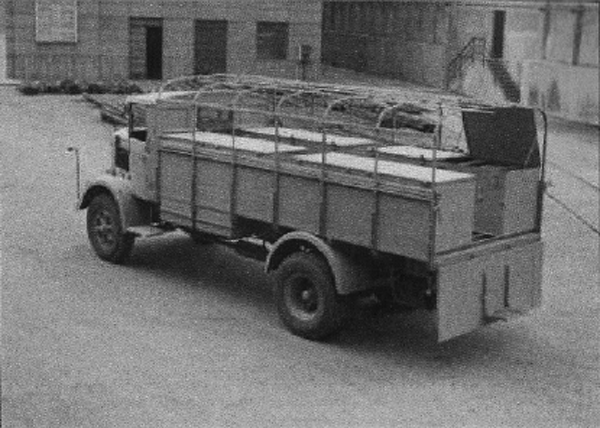 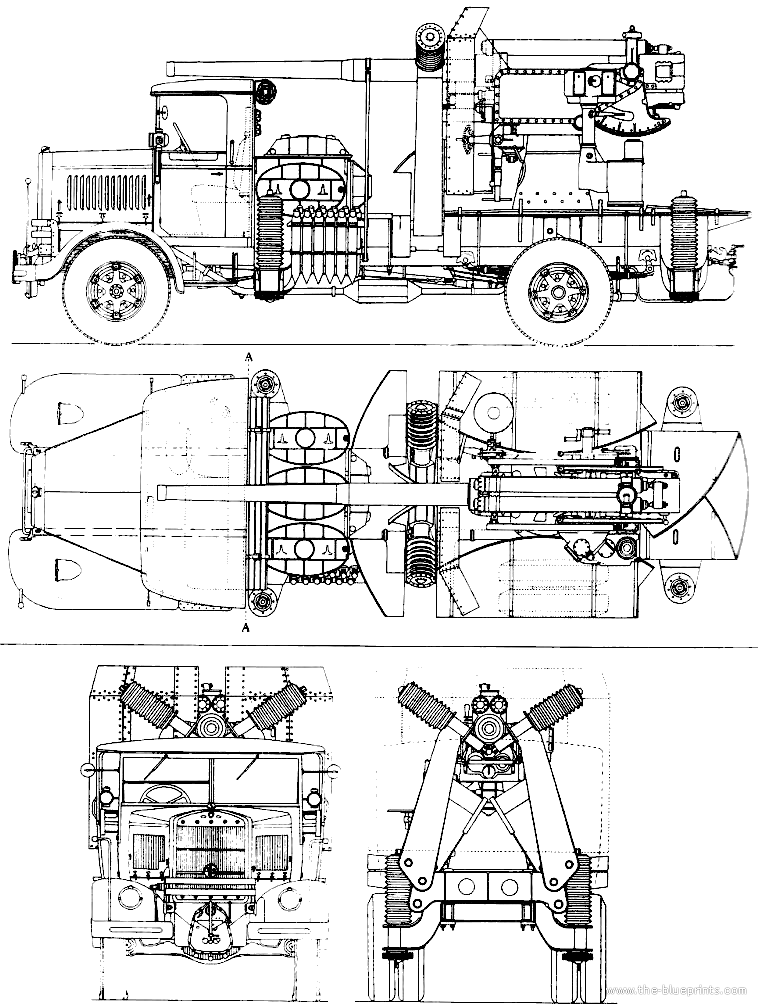 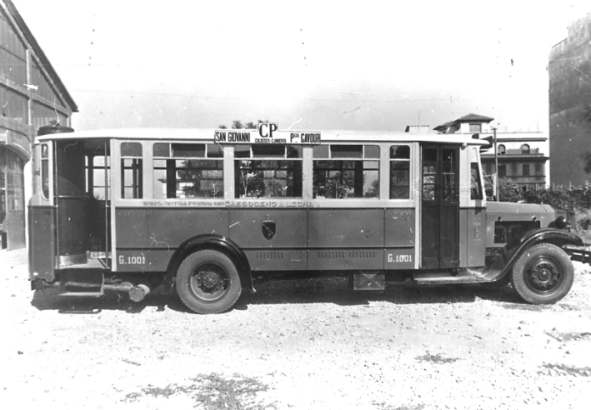 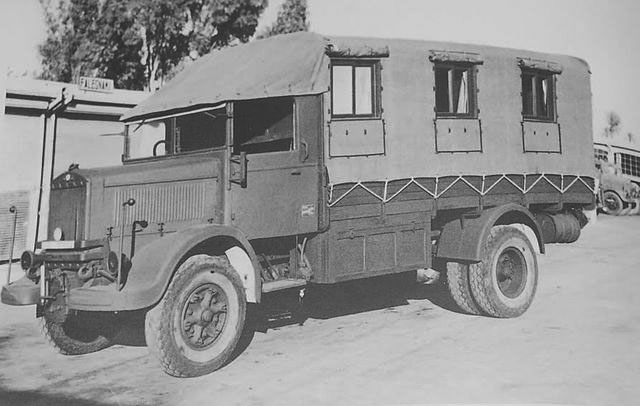 This truck became the standard troop carrier whenever available, also largely used by the Germans when available in North Africa. Also during that time, both in North Africa and Sicily self-propelled arillery versions were converted: The top of the cab was cut away, sideboards made lower, and with it, the Lancia 3 Ro became a self-propelled gun (portee) for the Cannone da 90/53 and the WW1-vintage 100/17 howitzer. The Germans used it in Sicily and in Italy as well, and this included the versions they produced (Einheits cabin). In fact after the Italian armistice (September 1943), the Wehrmacht cpatured all the Lancia Ro and 3Ro thy could to moorize their infantry in Italy. In April 1944, they gave an order to the Lancia factory they controlled, for 772 3Ro. Production went on from January 1944 to February 1945. The cold war Italian army also used the 3Ro in its late production versions, and the last one was retired only in 1964. Some have been preserved since. 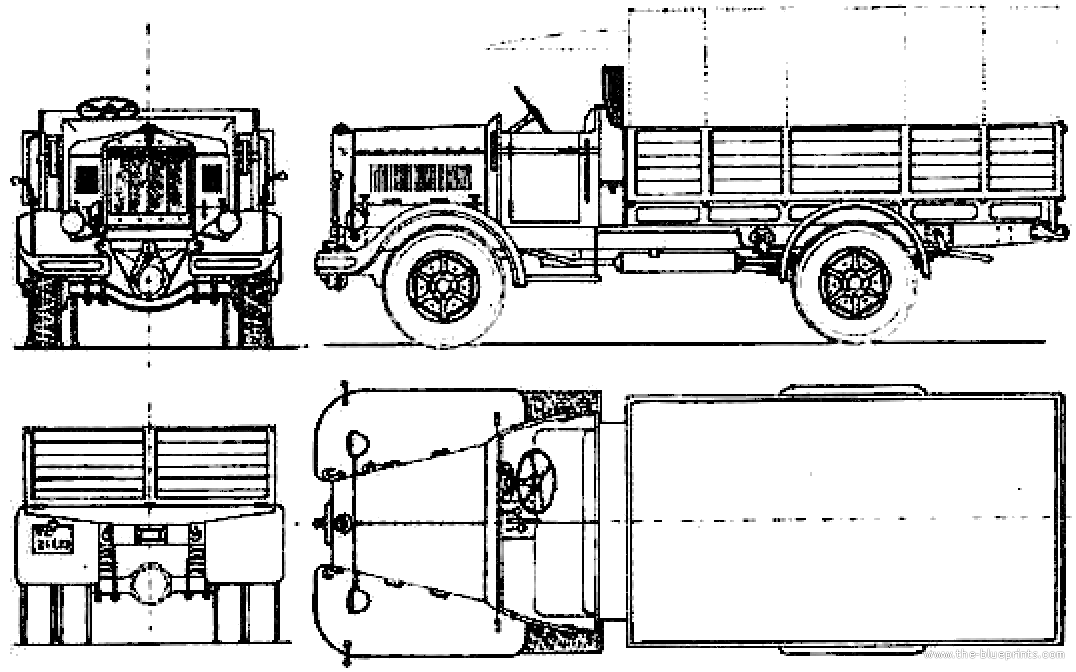 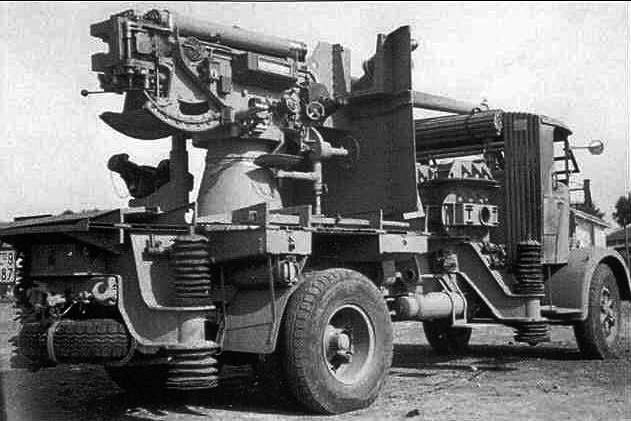 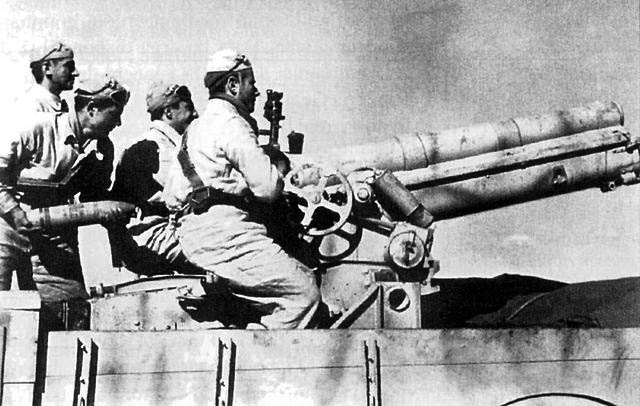 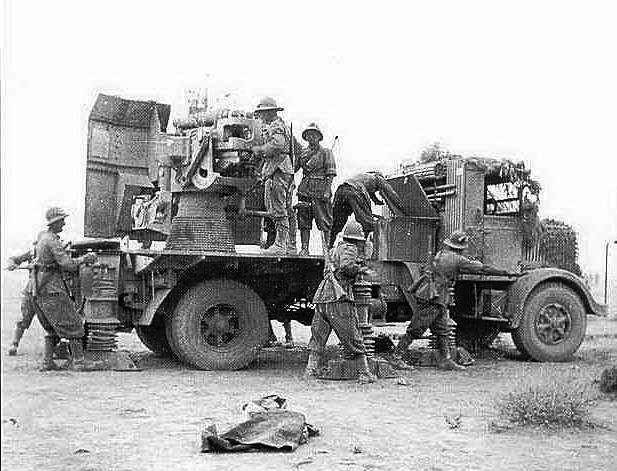 Links about the Lancia 3ro

Standard truck fresh from the factory in regular army olive green, 1939. The wooden rear open trunk is not yet assembled 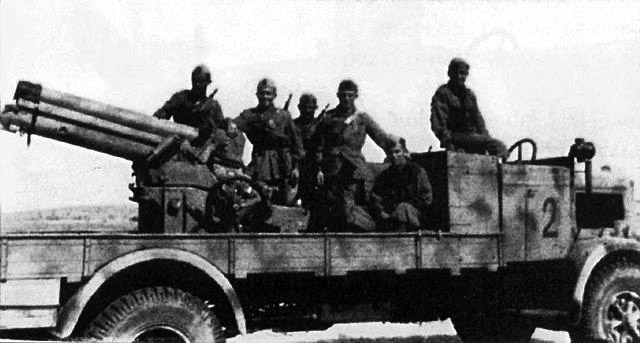 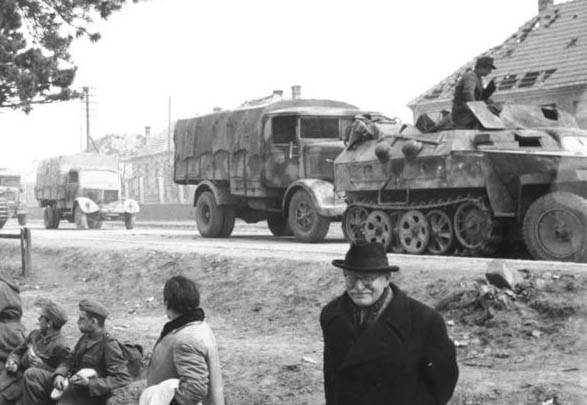 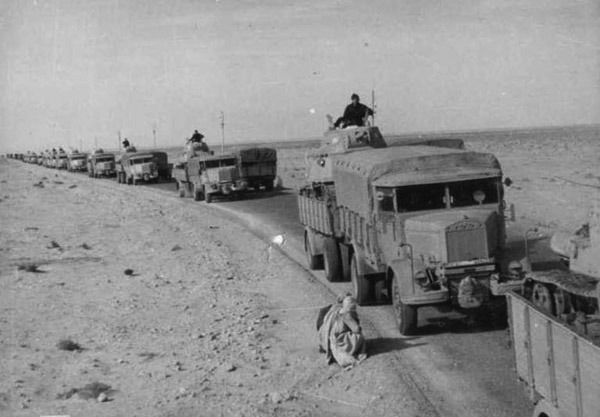 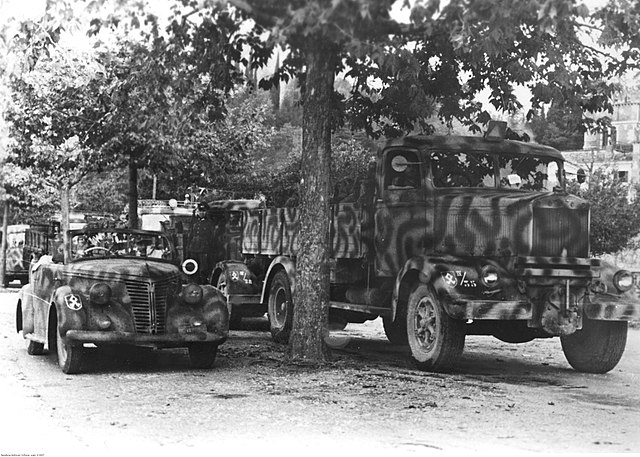 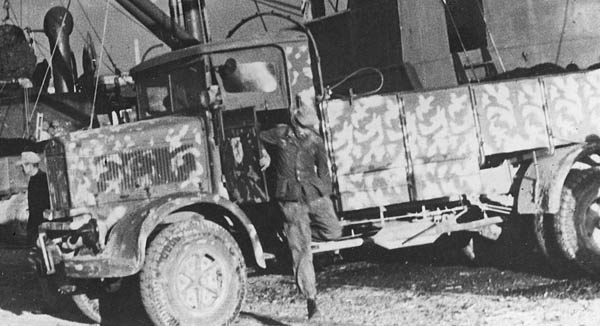