In 1942 (Showa 17), during the battle on Guadalcanal, the Japanese army landed supplies on the coast, but the number of trucks that carried them inland was limited. There, Allied warships attacked supplies left on the beach with no prospect of carrying them elsewhere and in effect all food and ammunition stores were stolen or destroyed. For this reason alone, IJA/IJN both agreed that trucks were needed to carry goods directly from offshore transport and cargo ships to inland depots. An amphibious truck would be ideal, and be expected would also cancel the need of support engineers to built and transport bridges when facing the river.

The lack of amphibious vehicles as a whole in the Imperial Japanese Army (IJA), contrary to the Navy which developed many amphibious tank models, urged in mid-1943 the constructon of three specialized vehicle: An amphibious truck, a light utility amphibious car, and the equivalent of the US landing track carrier (LVT). Development of the vehicle started at Toyota, the best placed wth its proposal of the conversion of its 4x4 truck, the To-Ki. Based on army specifications, the latter asked for an enclosed cabin (contrary to the reference of the time, the General Motors DUKW, based on the CCKW medium truck), a loading bay with higher freeboard in order to manage bigger waves and a more pronounced nautical qualities, with a better shaped hull. Overall it was to be also a smaller and lighter vehicle than the original.

Design of the Type 2 Su-Ki

Rear of a Su-Ki, back doors open SRC

To gain time, Toyota proposed in mid-1943 a boat-like truck with a rear open bay, based on its 4x4 2-ton medium truck To-Ki. He rused all components and kept them on their respective place, while the chassis was to be completely encased in a brand new, specially designed and watertight steel "boat" hull. Toyota kept also one of the key element of the To-Ki, so that the vehicle with its innovatve transfer case could operate in either 2-wheel or 4-wheel drive. In total, unladen, the vehicle weighted 6.4 tonnes, and up to 8.5 tonnes when fully loaded. It's useful payload was two tonnes, loaded at the end of the flatbed with a standard folding panel. The main difference with the stand truck was there was no side folding panels, replaced by the solid steel walls of the hull. The overall dimensions of the vehicle were 7.6 m in lenght overall, 2.2 m in beam and 2.4 m in height overall. It was propeled by a 6-cylinder gasoline Toyota rated at 65 PS (64 hp; 48 kW), the same as the To-Ki as well as most mencanhical parts. This was eneough for a Maximum speed of 65 km/h

The SU-Ki had a boat-shaped body ad the engine compartlent was made waterproof, and drainers and pomps being provided on the left and right sides forward as well as exhausts. The tires did not have fenders but there was was a propeller, but no rudder. Directions were only obtained by steering left or right, wheels turning. According to documents prepared postwar by the U.S. military over captured examples, all four wheels were separated from the power drive to action a screw propeller encased at the rear of the body when swimming at around 10 kts, steering provided only at the front wheels. The body steel plates had a thickness of 5 mm, quite thick for a "softskin vehicle" but because but this provided resistance gainst waves and water pressure, but also provided light armor protection, withstanding rifle fire and shrapnel. There was also a hinged door at the back for easy access/exit the vehicle, load/unload any payload.

Another photo of the same captured vehicle. SRC Tumblr

The Type 2 Su-Ki in action

Su-Ki amphibious trucks were used by the Japanese military forces on Pacific islands during World War II. Between November 1943 and August 1944, 198 Su-Ki trucks were delivered and Toyota went on working on the design to produce the experimental "Toyota LVT" in 1945, which never entered production. Commissioned in 1943 (Showa 18), the Su-Ki concept also resulted from the lessons of the Sino-Japanese War when amphibious transportation on streams, development at the time was postponed due to costs and labor issues. WW2 Carolines Island campaign and Guadalcanal in particular resurrected the project, and this time, there was an example to work from, the allied DUKW. However the resulting Su-Ki was a very different beast, lightly armored, with enclosed cabin, four-wheel drive and carrying only 2 tons of cargo. Toyota was the logical choice as the Japanese lead expert on 4x4 drive, and had been researching and developing four-wheel drive vehicles for many years. The wartime KCY type truck led to a prototype in June 1943, but production beeing discontinued with four units. The Su-Ki entered service in December 1943 or January 1944 and was seen in action until the end of the war in some pacific Islands.

During their operations in the Solomon and Gilbert Islands, planned Operation against the Ellice Islands, the IJA and IJN plus the Special Naval Landing Forces developed tactics related to the new amphibians. When ready, the Su-Ki for the first time were assembled to assault en masse the Ellice Islands, taking part in the whole Campaign later at the end of 1943 and the final phase of the Solomon Islands Campaign. However the Ellice Island Campaign urged also the construction of a dedicated amphibious landing craft, which Toyota started to work on, in effect the first Japanese Landing Vehicle Tracked (LVT) in early 1944.

The learned painful lessons from late 1942. The Su-Ki II was to be tracked as well as well armored all around and accompanied by amphibious tanks such as the Ka-Mi and Ka-chi. The development of the Su-Ki II Medium Assault Landing Craft really started in late 1944, with integrated machine guns for cover and about the same payload. The Su-Ki II still, could carry fewer soldiers than a Landing Craft, but offered better protection, supporting fire, including on the beach itself and inland. Toyota refined the desig with the Su-Ki III, with an integrated heavy and light machine guns, grenade launchers and better protection overall. The tradeoff was less space for supply or troops inside, and degraded performances on land as well and some variations were motorized, some mechanized. It all went to nothing as the war ended in September 1945 without a prototype of the Su-Ki III being built.

Illustration of the type 3 Su-Ki. Few photos exist to pinpoint a particular camouflage or variant, so i choose here a standard army green. 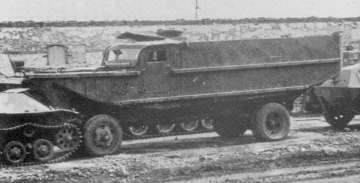 Various photos from the forum ih8mud.com

Rear of the vehicle, showing the back door - Encyklopedia Uzbrojenia

Several vehicles deployed in the Ellice is. campaign, 1944 SRC